Between 1972 and 2001, there was a group of activists called London Greenpeace (LG), which was completely unassociated with Greenpeace International and Greenpeace UK, as the London group saw these other organisations as “too centralised and too mainstream”. Throughout the 1970s, the group protested nuclear weapons testing and nuclear power. In the 1980s, LG was involved with the Stop the City campaigns, which protested against the military-financial complex. This included day-long street blockades in the City of London (financial district), the largest of which included 3,000 people, causing the approximate loss of £100 million. Subsequently, around 1,000 arrests were made over 18 months. 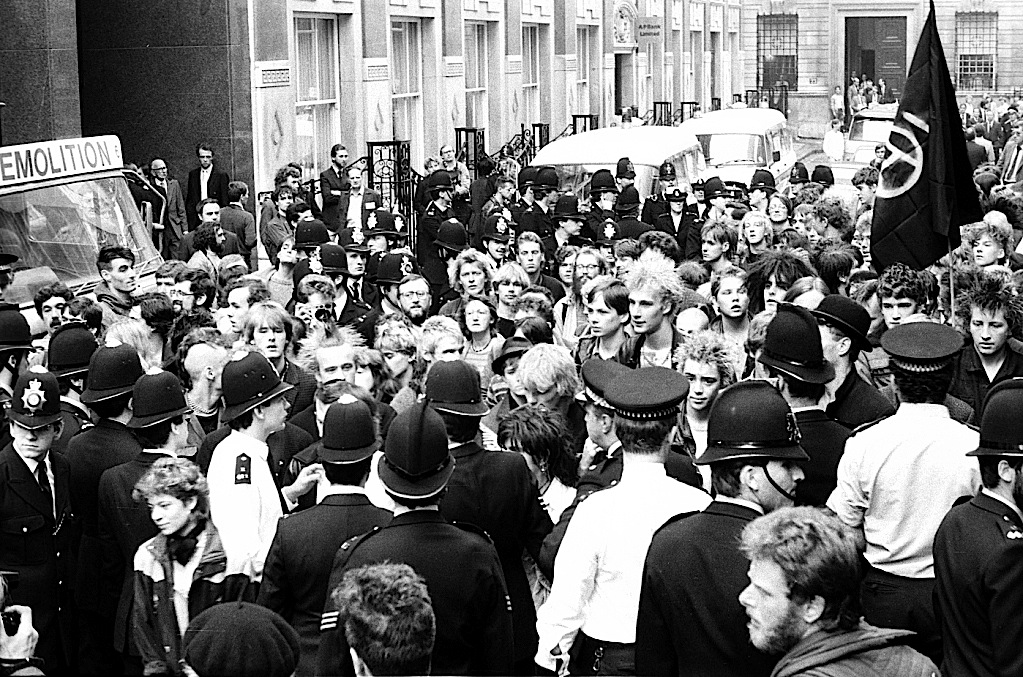 In 1986, members of London Greenpeace distributed a few hundred copies of a leaflet titled “What’s wrong with McDonald’s: everything they don’t want you to know” in Strand, London. The leaflet included lots of information, stating that McDonalds destroys forests, mistreats animals, and that their quarter pounder burgers are 48% water, amongst other criticisms. It also instructed readers to boycott the fast food giant. In 1990, McDonald’s brought libel proceedings against the activist group, namely Helen Steel and David Morris. This suit came after more than 90 other organisations had been successfully attacked by the McDonald’s legal team, including the BBC, Channel 4, The Guardian, The Sun, student newspapers, and a children’s theatre group.  According to No Logo, a book written by Naomi Klein and published in 1999, even Prince Philip had received a “stiff letter” from McDonald’s. McDonalds’ suit against London Greenpeace came to be known as the McLibel case.

On the first day of the trial, McDonald’s argued that the London Greenpeace activists should be denied a jury on the grounds that the jury would find the issues within the case too complex to deal with. Surprisingly, and much to the horror of the activists, the judge agreed. The megacorporation was defended by a team of around a dozen lawyers, whilst LG were left to defend themselves, without knowledge even of what to say, or when to say it. According to David Morris, they had even asked the judge to explain the procedures during the first hearing, and the judge said that “if you don’t know the procedures then you should be represented”. However, legal aid was not offered for libel cases, so the activists were to be completely independent, until Keir Starmer, (yes, that one) a barrister at the time, volunteered to assist the activists in their defense. Fortunately, some of the best professors came forward to agree with the claims of LG’s leaflet, affirming that McDonald’s is a significant health risk.

Throughout this case, McDonald’s received a number of devastating blows. Firstly, Dr Arnott, “McDonalds’ cancer expert”, was cross-examined by the LG defense. During this, he was asked if the following statement was a reasonable thing to say:

“a diet high in fat, sugar, animal products and salt, and low in fibre, vitamins and minerals, is linked with cancer of the breasts and bowel, and heart disease”.

Dr Arnott confirmed that, if this statement was directed to the public, then this is “a very reasonable thing to say”. Only after he had said this, it was revealed that the quote was taken directly from the London Greenpeace fact sheet, which was the subject of the libel action. This confirmation from McDonalds’ expert witness was painful not only for their case, but to their public image. Unfortunately, this was not enough to end the case then and there.

By August 1994, McDonald’s wanted to settle the case out of court, but the LG activists secretly recorded the settlement meeting. During this conversation, David and Helen made it clear that they would settle the case, if McDonald’s apologised to the people who they had previously sued on similar grounds, and promised not to sue any more people in the future. Obviously, McDonald’s refused, and instead insisted that Helen and David were free to criticise McDonald’s in private, to their friends and neighbours, but not publicly. In response, the LG activists sent a letter to the McDonald’s lawyers, which said that they will agree to those terms if McDonald’s will no longer advertise their business publicly, and only privately to their friends and neighbours. With settlement discussions at a stalemate, the case continued.

As time went on, Helen and David grew more frustrated with the mainstream media, who they felt were ignoring the real issues. So, on the 16th of February 1996, they published McSpotlight.org, a website which they described as “a library of information about the McDonald’s corporation, all the things they don’t want you to know, and all the things they’ve now failed to stop the public finding out about”. For the first time, the public could read the full story, with all of the unfiltered facts. From this, much more funding and many witnesses came forward, from eminent scientists to ex-employees of McDonald’s. Some of these witnesses had nowhere to stay, so they slept in David’s spare room in order to attend court the next day. After 292 days, the McLibel case became the longest court case in English history. It was around this time that Helen and David showed a video from a poultry farm supplying McDonald’s, which had been secretly recorded. Every day, around 1300 adult birds had their throats cut while fully conscious, and about 1000 unwanted chicks were gassed every week. Regardless of the judge’s verdict on these issues, the undeniable evidence had dragged McDonalds’ reputation through the dirt.

By the end of the trial, the judge ruled in favour of McDonald’s in regards to its links to cancer and heart disease, its litter, the destruction of rainforests, and working conditions. In contrast, the judge ruled in favour of London Greenpeace in regards to the deceptive advertisements of McDonald’s, their exploitation of children, low wages, their anti-union stance, and animal cruelty. Helen and David were ordered to pay £60,000 in damages. After an appeal, the court agreed that McDonald’s does in fact have poor working conditions and links to heart disease, so the damages were reduced to £40,000. As David and Helen left the courts, feeling exhausted and victorious, crowds greeted them with cheering. Helen and David refused to pay the £40,000, on the grounds that “McDonald’s don’t deserve a penny, and in any event, we haven’t got any money”. McDonald’s never attempted to claim this money, which in fact was only a drop in the ocean compared to the £10 million spent in legal fees by McDonald’s. It was later found out that one of the co-writers of the infamous leaflet was an undercover police officer who had infiltrated London Greenpeace, in addition to another undercover officer who was Helen’s partner for two years, never revealing his true identity or motives. On the 15th of February 2005, the European Court of Human Rights ruled that the McLibel case had breached Article 6 (right to a fair trial) and Article 10 (right to freedom of expression) of the European Convention on Human Rights, and ordered that the UK government pay Helen Steel and David Morris £57,000 in compensation. This was an enormous victory for the pair, and a brilliant conclusion to a 20-year-long story. 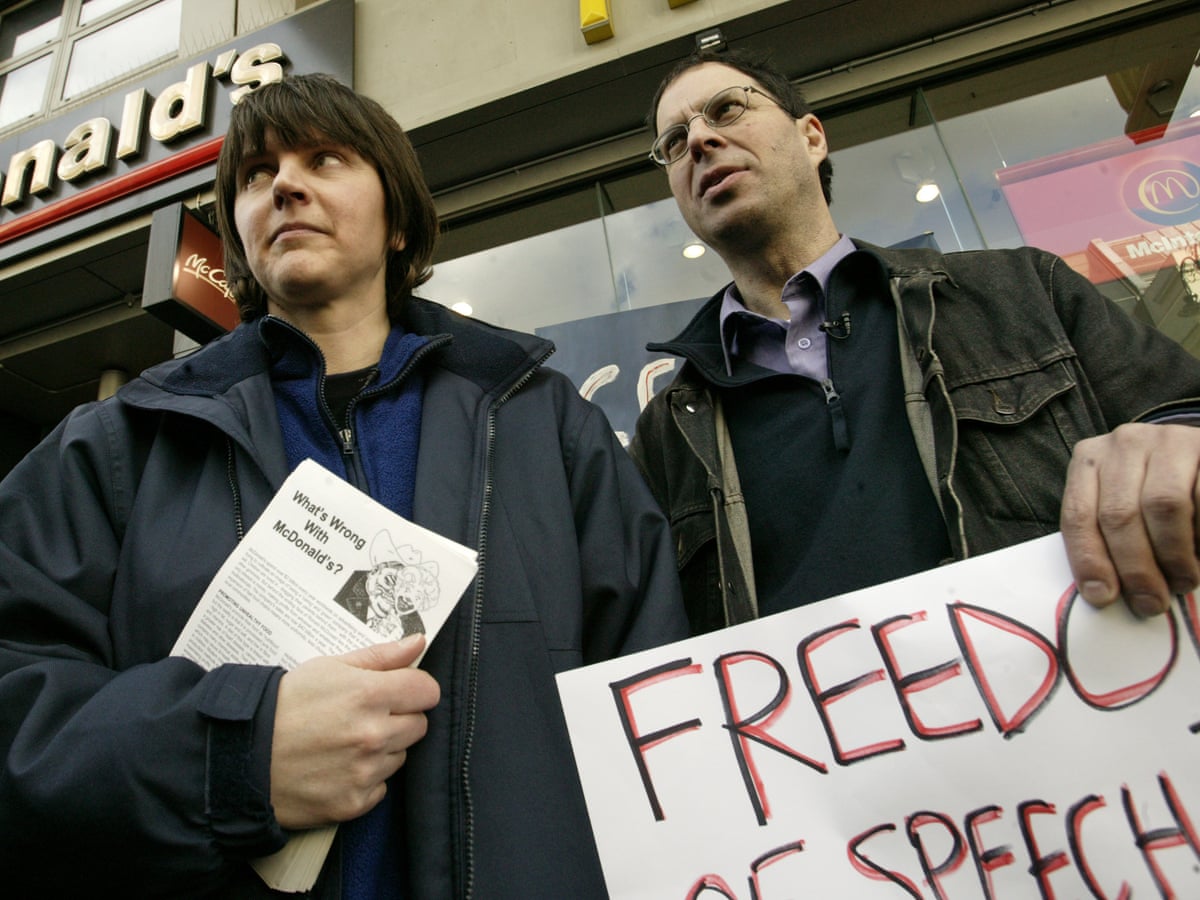 This court case opened the floodgates for activists to inform the public with criticisms of massive companies, and many themes seen throughout it are still discussed by many activists today. Although London Greenpeace never would have anticipated it, their case against McDonald’s is historic, leaving a permanent scar on the megacorporation which spans over 100 countries, and is now estimated to be valued at around £125 billion. This damage was only possible because Helen Steel and David Morris, in spite of everything stacked against them, carried on. The inspiring duo, whose encouraging story reminds us that David defeated Goliath, found their strength in refusing to back down. Localists must look to figures like these London Greenpeace activists, who share similar sentiments and fought against the same opponents, so that we too can find our strength in refusing to concede, no matter how large or powerful the adversary may be. To conclude this article, I will provide a quote from the McLibel documentary (https://www.youtube.com/watch?v=V58kK4r26yk), which holds poignancy today:

“It’s not just what goes on at McDonald’s itself that’s the problem. The key practices that they’ve pioneered over the last 50 years are spreading throughout society and becoming the norm. Those key practices would be uniformity, conformity and control; control over the worker, control over the consumer, and a very homogenous culture that tries to stamp out genuine iconoclasm and tries to control what can be said about these companies publicly.”
– David Morris and Eric Schlosser, 2005

a:2:{s:4:"text";s:0:"";s:4:"show";i:0;}
We use cookies to optimise our website and our service. Accepting Cookies will ensure this webiste functions as intended.
Manage options Manage third parties Manage vendors Read more about these purposes
Preferences
{title} {title} {title}